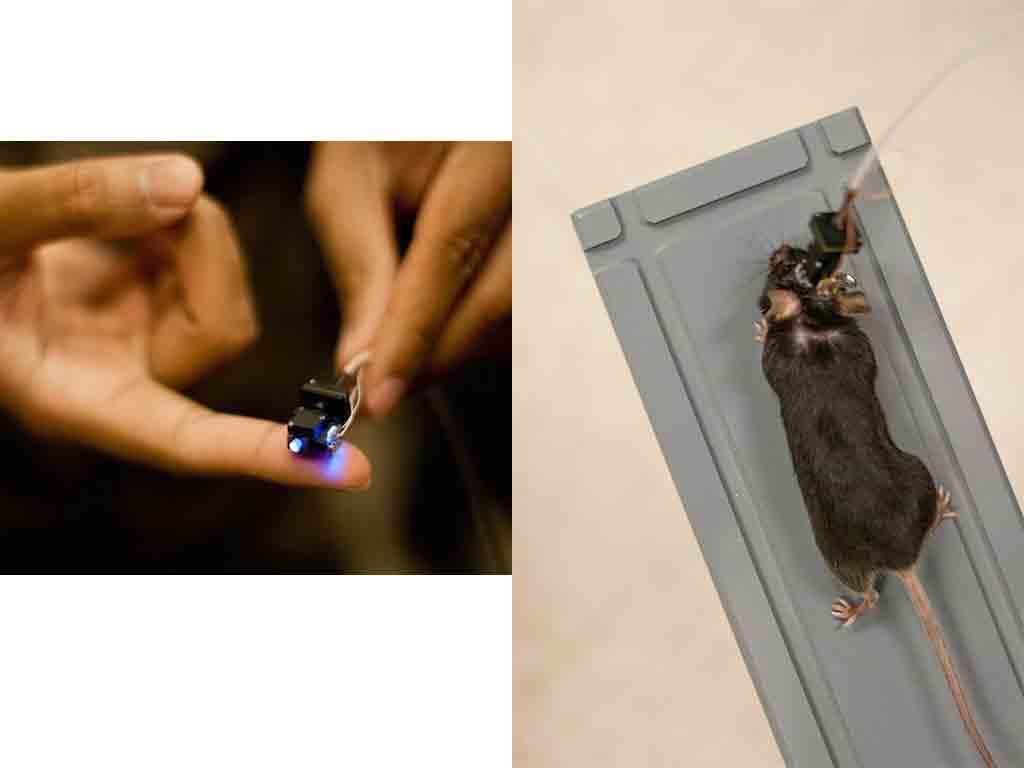 This Camera Records The Thinking Brain

What’s going on in that head of yours?

It’s a question both awkward dates and neuroscientists want answered.

Left: This fingertip-sized camera monitors brain activity in real time and can be fitted on a mouse head like a helmet. Right: A mouse in the lab wearing the Inscopix camera. (Credit: Inscopix Inc.)

From recalling the way home to remembering where to go to find food, the ways the brain processes information have remained largely a mystery for decades.

One reason it’s been hard for researchers to learn more about what’s happening in the brain: they haven’t been able to see information-moving neurons working in real time.

“That is the holy grail to understanding how the brain works,” says Kunal Ghosh, founder of Inscopix, the company behind the live-streaming brain camera now being used in labs around the world.

On the right: neural imaging of the mouse’s brain in real time. This experiment helped scientists understand more about how specific neurons are related to spatial memory and movement. Watch how the circled cell is active when the mouse is near the top end of the track–when that specific neuron lights up, the researchers know exactly where the mouse is located… and where it’s headed next.

The mouse-cam, first introduced to the market about two years ago, is being used in both university research labs and pharmaceutical testing. Now, about a dozen or so of the first findings from camera research are starting to trickle out.

The device is part of a growing network of tech being built to answer the fundamental question: what is the brain doing?

The question is being asked not just by scientists in the lab, the federal government wants answers too: they’ve already invested more than $300 million in the first two years of a ten-year project they’re dubbing the “BRAIN initiative.”

Started by President Obama in 2013, the push ”aims to understand the relationship of brain circuit activity to behavior,” Dr. Thomas Insel, director of the National Institute of Mental Health says. “The BRAIN initiative is trying to decode the language of the brain, at the speed of thought.”

This first live-action brain camera, built to watch large swaths of the brain never before seen in movement, is a two-part system: first, mice are injected with a super-thin needle-like lens, or, they are bred in the lab with groups of fluorescent cells that light up in front of the camera. Once certain sets of the mice brain neurons are glowing, researchers can fit the rodents with fingertip-sized cameras, which the mice wear like a helmet.

Professor Mark Schnitzer, who helped invent the brain camera, made a few key discoveries of his own about the way the brain encodes for place and space using his camera. He and his team at Stanford University discovered certain neurons were firing only when the mouse was in a certain place, “so we can actually see how the brain adapts as it becomes more familiar to a new spatial environment and how these neural circuits are at work when an animal recalls a particular path.”

At MIT, researchers are now using the camera to disentangle which neurons convey space and time in the brain:

Professor Schnitzer says the camera could have big implications for the way we treat these diseases and develop drugs, allowing treatments to take a more “sophisticated” approach. He says that’s because when scientists know more about where and how memories and patterns are created, treatments can do more than “just tuning up or down a limited number of chemicals,” instead, “thinking about how behavior was actually shaped,” and using that information to guide treatment.

If I Only Had A…Camera

For now, the camera… is rodents-only issue. Inscopix says primates are next. But Insel, the mental health expert, says finding a way to build a human brain camera will be important as we learn more and more about how the brain works–that is, provided a human camera could be mounted and installed safely (without having to breed florescent human brains, for example).

As Insel points out, hundreds of thousands of Parkinson’s patients already have deep brain stimulators being put into their heads. And while a live-action brain camera probably wouldn’t get awkward dates any closer to an easy answer for the age old dinner-table “what are you thinking right now?”… It could help unravel more about how we’re thinking… and how to more effectively correct neural problems when the brain starts to go off track.