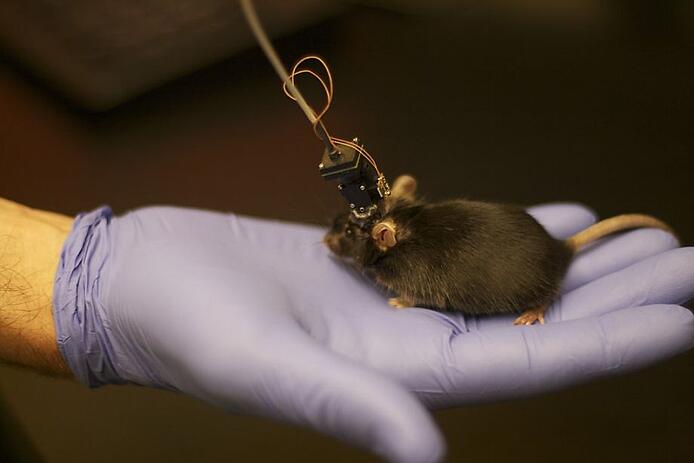 Scientists at Stanford University have tapped into the mind of the mouse and are now circulating information about how the pesky rodents think.

A team of Stanford researchers planted tiny probes inside the brains of mice to detect what were essentially mouse memories, according to a study published last month in the online edition of Nature Neuroscience.

The experiment involved the insertion of a needlelike microscope into the hippocampus - a part of the brain associated with spatial and episodic memory. The microscope detected cellular activity and broadcast digital images through a cell phone camera sensor that fit like a hat over the heads of the critters as they scampered around an enclosure.

"We're not really reading their minds," said the lead researcher, Mark Schnitzer who is an associate professor of biology and applied physics at Stanford. "What is the mind of a mouse, anyway? I don't know. What we're doing is reading a spatial map in the brain. It is one little component of many, many processes that are going on inside."

Over the course of a month, the scientists were able to document patterns of activity in some 700 neurons and pinpoint areas of the brain where mice store long-term information. It is important, Schnitzer said, because long-term memory is an area of the brain that researchers are struggling to understand as they attempt to develop new therapies for neurodegenerative diseases, including Alzheimer's disease.

"Those are clearly diseases in which information storage has been impaired," Schnitzer said. "Now that we can look at the neural code for how the spatial information is stored, it opens the door directly to subsequent experiments. That's the logical next step."

To get the results, Stanford researchers first inserted an engineered gene into the hippocampus of the mice so that their proteins were sensitive to calcium ions. That caused the magnified cells to light up on the computer screen in flashes of green fluorescence - like tiny bursting fireworks - when the neurons were activated.

Schnitzer said there was a clear pattern of cellular activity as the rodents encountered familiar and unfamiliar scenery during their explorations in the laboratory's experimental arena.

The noggin-tapping invention is still a long way from being used on humans, but it may soon be available to other experimenters. Three students who worked on the project have formed a startup company called