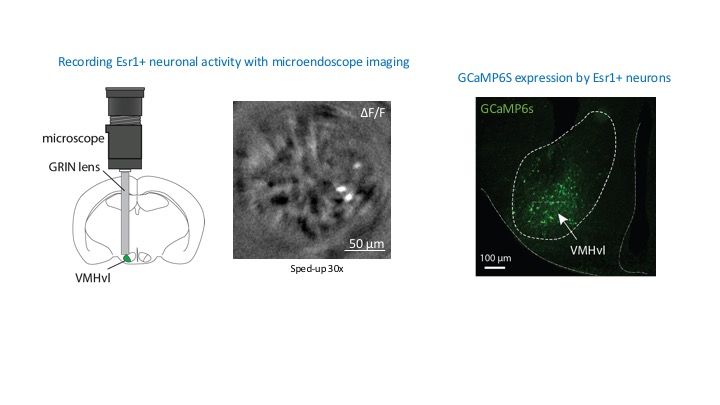 A mouse’s ability to differentiate male mice from female mice results from neural circuits that are hardwired in the hypothalamus of the brain, or at least that’s what neuroscientists thought. Because the hypothalamus is an evolutionarily ancient structure, and is also involved in instinctive behaviors like feeding, mating and aggression are considered innate behaviors in mice. But in a new study published today in Nature, scientists from California Institute of Technology, Stanford University, and ETH Zurich demonstrate a learned component that is represented in changes in neural circuit activity.

To understand the neurobiology underlying their surprising finding, the scientists employed the Inscopix nVista imaging system to investigate the simultaneous activity of hundreds of individual neurons in the ventrolateral subdivision of the ventromedial hypothalamus (VMHvl) during mating and fighting behaviors. This method gave the authors the ability to image using microendoscope to an unprecedented depth in the brain while mice freely behaved. The mice interacted with intruder male or female mice.

Co-first author on the paper Ryan Remedios, PhD, recorded calcium dynamics in Oestrogen receptor 1-expressing (Esr1+) VMH neurons while animals freely behaved and interacted with conspecifics. He implanted a microendoscopic GRIN lens that reached deep down to the Esr1+ neurons expressing the genetically encoded calcium indicator GCaMP6s in the VMHvl. The nVista system included a head-mounted miniature microscope which coupled to the microendoscope GRIN lens, and allowed simultaneous imaging of over 200 individual neurons per mouse as they engaged in social behavior.

With a robust end-to-end system like nVista, the authors successfully collected calcium images from socially and sexually experienced males as they freely interacted with different male or female intruders, or a toy mouse as a control. The authors used PCA/ICA and other impressive analyses to extract and analyze signals from individual neurons during social behavior. In experienced mice, they observed consistent neural ensemble representations upon exposure to different intruder males. Yet, when they tested with intruder females, the patterns of neural activity observed in the experienced males were not at all similar to what they measured with male intruders. In other words, intruder females activated different neural circuits than intruder males.

They then repeated the experiment with naive males who had been held in isolation. In this case, the neural ensembles measured upon exposure to male and female intruders were similar, and behaviorally the naive males did not treat the intruder males or females any differently. However, a mere 30 minute “priming” exposure to a female was enough to result in the formation of disparate neural activity patterns between intruder males and females measured 24 hours later in the formerly naive male.

Their results suggest physical interactions with females drive the change in neural ensembles. They observe disparate neural circuits that form as a male mouse learns to differentiate males from females, and respond accordingly by either acting aggressively or trying to mate. This work paves the way for a better understanding of the neural circuits involved, and how they change with experience.

Moreover, this study is an outstanding example of the high caliber science that is catalyzed when breakthrough neurotechnologies are coupled with thoughtful experimental design and robust data analysis. When researchers work across disciplines and sectors, employing novel technologies, exciting things can happen in neuroscience.