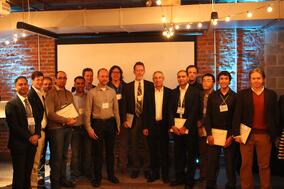 WASHINGTON, Nov. 18, 2014 /PRNewswire/ -- Inscopix, Inc. ("Inscopix") announced the first DECODE awardees at a special event held in Washington D.C., on the sidelines of the Society for Neuroscience 44th Annual Meeting. The $2 Million DECODE (Deciphering Circuit Basis of Disease) Grant Program was launched this past summer to support the Presidential BRAIN Initiative.

Guest of honor, Dr. Thomas Insel (Director, NIMH), felicitated the awardees during the ceremony. In his remarks to the gathering, Dr. Insel said, "What is the language of the brain and how do we begin to decode that, is probably the challenge of the century." Speaking about DECODE, he added, "It's fantastically exciting that Inscopix has decided to crowdsource this challenge by providing the equipment to get started on this to the best and the brightest scientists with really cool ideas".

DECODE is a bold attempt by Inscopix to disrupt the traditional grant model. Through technology, training, and a scientific partnership with the DECODE awardees, Inscopix will transcend the traditional grantor-grantee dynamic, and seek to accelerate the discovery of neural circuit based signatures of brain disease.

The DECODE portfolio is eclectic with awardees investigating the neural circuit basis of diverse brain disorders such as Autism, Obesity, PTSD, and ALS. Dr. Amar Sahay, a young investigator said, "The DECODE award will tremendously catalyze the efforts of my recently established multi-faceted research program and may identify novel biomarkers and cellular indicators of therapeutic action for PTSD."

Inscopix is pioneering a new paradigm in the quest to understand the brain and its diseases. Inscopix has developed the means to relate neural circuit dynamics to corresponding behavior. With its flagship product, nVista HD, Inscopix is today disseminating these capabilities to neuroscientists across the world, empowering them to gather unprecedented data sets and make breakthrough scientific discoveries. With in-house neuroscience expertise combined with strategic collaborations around the world, Inscopix stands at the brink of making fundamental advances in basic brain research and treatments for diseases such as Parkinson's, autism and schizophrenia.