There were so many interesting neuroscience papers published in August relevant to neural circuits that curation across journals was extra challenging. Here you go!

This is a first! They applied nVista technology to image calcium transients in neurons of the motor cortex of marmosets as they freely behaved. This novel application opens up the possibility to dissect large-scale neural circuits during human-relevant behavior under natural conditions. The combination of Inscopix brain imaging systems with transgenic marmoset technologies has the potential to transform our understanding, diagnosis, and treatment of human brain diseases. 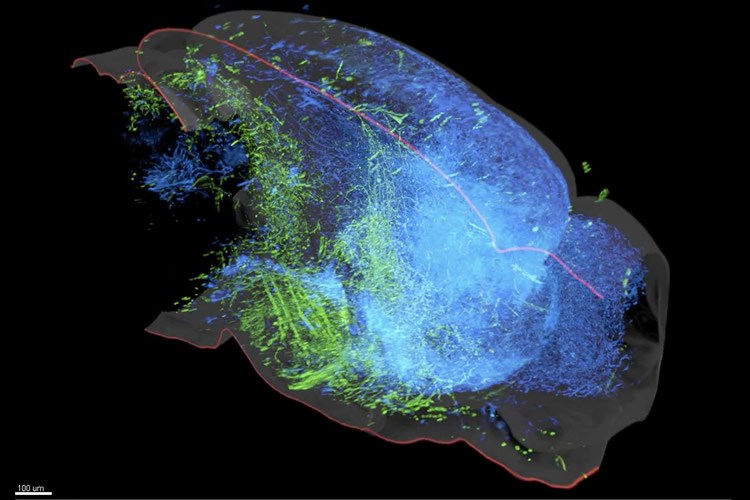 They generated a cellular atlas of the mouse brain, based on the gene expression profiles of nearly 700,000 individual cells covering nine major brain regions including frontal and posterior cortex, hippocampus, cerebellum, thalamus, striatum, and substantia nigra. They produced an unbiased characterization of the brain's diversity, providing a valuable dataset for linking cell types to circuits.

They compared the activity profiles of amygdala, hippocampal, and thalamic inputs to the nucleus accumbens shell in mice performing a cued reward-seeking task using GCaMP-based fiber photometry. They found that the rostral and caudal ends of the NAc shell are innervated by distinct but intermingled populations of forebrain neurons that exhibit divergent feeding-related activity.

To investigate the role of motor cortex (M1) in sensory guided motor coordination, they trained mice to navigate a virtual corridor and found that M1 is essential for execution and learning of this visually guided task. Turn-selective layer 2/3 and layer 5 pyramidal tract (PT) neuron activation was shaped differentially with learning but scaled linearly with turn acceleration during spontaneous turns. During induced turns, however, layer 2/3 neurons were activated independent of behavioral response, while PT neurons still encoded behavioral response magnitude. Thus, the motor cortex is necessary for the execution of corrective movements in response to unexpected changes of sensory input but not when the same movements are executed spontaneously.

This made a big splash in the news, so you probably already know all about “rosehip” neurons. Rosehip cells show an immunohistochemical profile (GAD1+CCK+, CNR1–SST–CALB2–PVALB–) matching a single transcriptomically defined cell type whose specific molecular marker signature is not seen in mouse cortex. Rosehip cells in layer 1 make homotypic gap junctions, predominantly target apical dendritic shafts of layer 3 pyramidal neurons, and inhibit backpropagating pyramidal action potentials in microdomains of the dendritic tuft. These cells are therefore positioned for potent local control of distal dendritic computation in cortical pyramidal neurons. NIMH Director Joshua Gordon, who was not involved in the study, says this discovery in the human brain is likely to be the tip of the iceberg!

The claustrum provides a dense synaptic input to the cortex, but how claustrocortical projections modulate cortical activity is not known. Here they show that claustrocortical connections serve to inhibit cortical neural networks by activating specific subtypes of cortical interneurons (Prefrontal NPY and PV).

They identified a network of cells in the entorhinal cortex that appear to play a key role into putting experience into a temporal context.

They “demonstrate that stimulating 5-HT release in the NAc promotes sociability, effects that require activation of NAc 5-HT1b receptors. Inhibition of DR 5-HT neurons or their terminals in the NAc reduced social interactions, suggesting that 5-HT action in the NAc is necessary for normal levels of sociability. Consistent with this conclusion, increases in DR 5-HT neuron activity occur during non-aggressive social interactions, including mating, although increases may also occur during sucrose or food intake. Stimulating 5-HT release in the NAc did not elicit acute reinforcement or changes in a variety of control behaviours. These behavioural effects of 5-HT in the NAc are markedly different from the acute reinforcing properties of the release of dopamine in the NAc, suggesting critical differences in the NAc circuitry modulation by which these major neuromodulators mediate their behavioural effects.”

They performed an in-depth mapping of cerebello-striatal connections in mice, and uncovered dense connectivity from the interposed deep cerebellar nucleus via the parafascicular and centrolateral nuclei to the dorsal striatum. They find that DCN outputs are relayed to MSNs but also striatal ChAT interneurons. Silencing of DCN outputs modifies the function of striatal ChAT interneurons and impairs behavioral performance of mice in a striatum-dependent task. Their findings suggest that cerebello-striatal connections from interposed DCN relay cerebellar computations to several striatal cell types.

“Anterolateral motor cortex (ALM), a higher-order motor area in the mouse, and ventromedial thalamus (VM) are anatomically and functionally linked, but their synaptic interconnections at the cellular level are unknown. Our results show that ALM pyramidal tract neurons monosynaptically excite ALM-projecting thalamocortical neurons in a medial subdivision of VM, and vice versa. The thalamo-cortico-thalamic loop formed by these recurrent connections constitutes a circuit-level substrate for supporting reverberant activity in this system.”

This is an intriguing result. “Departing from the most influential model of episodic memory (the two-streams hypothesis), we have recently proposed a new concept of information processing in the hippocampus according to which “what” one remembers and “where” or “when” it happens might be processed by distinct subnetworks segregated along the proximodistal axis of the hippocampus, a brain region tied to memory function, instead of being systematically integrated at this level. Here, we focused on the processing of temporal and/or spatial information in the proximal and distal parts of CA1 and CA3 in mice to test whether the two concepts are reconcilable. To do so, we used an imaging method with cellular resolution based on the detection of the RNA of the Immediate Early Gene (IEG) Arc, which is tied to synaptic plasticity and memory demands, and correlated imaging results with memory performance. Our data confirm the existence of subnetworks segregated along the proximodistal axis of CA1 and CA3 that preferentially process spatial and non-spatial information and suggest a key involvement of distal CA1 in temporal information processing. In addition, they show that the two models are complementary to a large extent and posit the “segregated” model as a viable alternative for the two-streams hypothesis.”