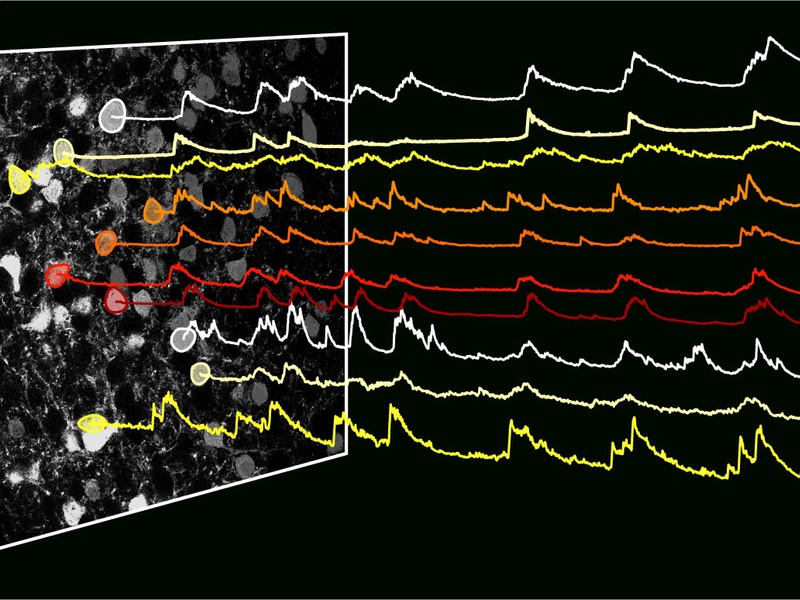 For August, we selected 10 papers that cover the circuit mechanisms involved in a full spectrum of behaviors, including feeding, moving, sleeping, socializing, remembering, and scratching an itch. Most of the studies listed below record and manipulate activity in specific neuronal populations in freely moving mice. Three of the studies apply the Inscopix nVista system for mapping neural circuits in real time during active behavior, and are excellent examples of functional cell-type mapping and neural coding.

This is an important paper for getting at the mechanisms of autism, and paves the way for greater investigation into circuits and molecules involved. They use optogenetics to modulate the excitation/inhibition balance in the prefrontal cortex of an autism-like mouse model and saw rescue of social behavior deficits.

They show that central amygdala Htr2a neurons increase in activity specifically during food consumption. They found evidence that Htr2a neurons encode the value of food. By activating the HTR2a cells, the researchers were able to condition mice to prefer a specific taste that was initially less preferred.

This paper received a lot of social media attention. They ask how itch information is transmitted to the brain and what central circuits underlie itch-induced scratching behavior. They reveal a central neural circuit involving the the spinoparabrachial pathway that is critical for itch signal processing.

How do we stop ourselves from seeking rewards in the face of a punishment, such as in addiction? Here they find that taking action with known risk of punishment involves acutely diminished medial prefrontal cortex to nucleus accumbens (but not mPFC→VTA) influence. Activity within specific substreams of the mPFC→NAc projection both signals information about prior aversive outcomes and serves to suppress the taking of the rewarding action.

GABAergic Lhx6+ ventral zona incerta (VZI) neurons promote both NREM and REM sleep, rather than either alone. They also exhibit a relatively slow-onset but long-lasting regulation of sleep. “Lhx6+ VZI neurons receive inputs from multiple different subtypes of sleep-regulating neurons, and are directly presynaptic to wake-promoting GABAergic and Hcrt+ neurons of the lateral hypothalamus and inhibit their activity, with this latter function being essential for their promotion of NREM sleep.”

How does the brain generate behavior? They measured the spatiotemporal neuronal dynamics (by using Inscopix nVista) of the two major striatal projection pathways (SPN) in the dorsal striatum during self-paced, natural movements. They demonstrate action-specific SPNs are more correlated and spatially closer to each other and encodes action space beyond movement speed.