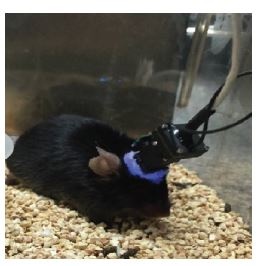 Addiction is surging in the United States. We’re all aware of the current news on the opioid crisis, and at least one in every 10 American adult is addicted to drugs or alcohol. Though the specific reasons for addiction must vary with the person, there are universal features, like the way we learn to associate environmental cues with the reward sought in a substance of abuse. This learned association of place with reward is a major cause of relapse. Memory systems play in heavily to how craving and relapse get triggered, and thus a better understanding of learning systems in addiction is paramount.

There are discrete neural circuits across brain regions involved in addiction, and contextual information is thought to be processed in the hippocampus. The hippocampus is primarily studied for its role in learning & memory and encoding the memory for a spatial location. A recent study implicates an increase in hippocampal activity after mice learn to associate cocaine with a place, or otherwise known as cocaine conditioned place preference. Thus, CA1 is poised to contain neural circuits critical for reward-associated place preference. In a new paper in Cell Reports, researchers from the Michael Bruchas lab at Washington University in St. Louis tackle the neuroscience of addiction head on by looking directly at neural circuits in the hippocampus when mice freely behave and learn to associate a place in space with nicotine reward. As co-lead author Stephanie Nygard says, “Neuroscientists have yet to link CA1 activity to nicotine-seeking behavior, and our study shows a circuit mechanism for this complex behavior.”

In a novel set of experiments, the researchers first determine that CA1 neuronal activity is necessary for both the acquisition and expression of nicotine-reward contextual associations by using chemogenetic silencing of dorsal CA1 neurons with the DREADD system. Next, they dissect the neural activity in dorsal CA1 while mice freely behave and form a nicotine place preference. By employing the Inscopix nVista miniature microscope system, the authors simultaneously visualize real time Ca2+ dynamics in hundreds of CA1 pyramidal neurons during nicotine conditioned place preference. Co-lead author Li Xia says, “We saw clear increases in both the frequency and intensity of Ca2+ activity in dorsal-CA1 pyramidal neurons during nicotine conditioned place preference.” Interestingly, the increase in activity corresponds to the magnitude of the nicotine-reward seeking behavior. To show that the relationship they see is specific to dorsal-CA1 neural activity to spatial representation of a context associated with nicotine reward, they also image CA1 hippocampal neuronal activity during the acquisition and expression of an operant reward task with sucrose. In the latter case, they do not see a specific increase in dorsal CA1 Ca2+ dynamics simply to reward presentation. To further dissect the role of dorsal CA1 cells in nicotine conditioned place preference, they look more carefully at Ca2+ dynamics in CA1 hippocampal cells, the gist of which shows that a specific ensemble of dorsal-CA1 Ca2+ transient activity is tightly locked to subsequent nicotine-reward seeking behavior.

This study employing in vivo Ca2+ imaging approaches with miniaturized microscopes in freely moving mice successfully reveals specificity of a nicotine-paired CA1 ensemble that predicts and is active during nicotine conditioned place preference expression. These results provide fascinating insight suggesting the hippocampus as a critical player in forming drug-associated memories for place preferences, and adds to our understanding of how drugs hijack neural circuits, thinking and behavior.