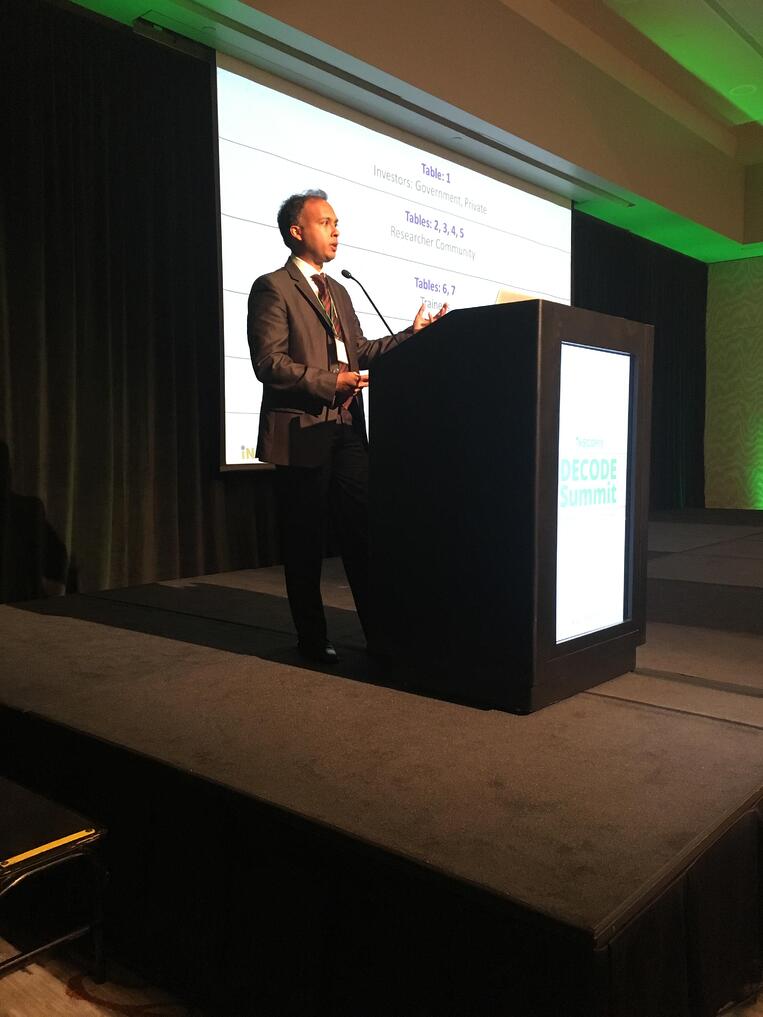 The DECODE Summit: A Multi-Stakeholder Gathering on the Translational Value of Neural Circuit Research

It was an honor and privilege to have hosted the DECODE Summit at the Four Seasons in Palo Alto on September 28th, 2016, bringing together stakeholders across distinct nodes of the neuroscience community. In the coming weeks we’ll make the talks and Keynote Panels open and available on our website and through other channels. In the meantime, I’d like to offer some brief remarks on why we hosted the Summit, including the genesis of DECODE -- an innovative grant program we launched in 2014 with a $2M investment to “crowdsource” the discovery of neural circuit signatures of disease.</p> <p>The economic cost of neurological and psychiatric disorders and diseases is estimated at $1.2 trillion annually in the U.S alone, and at $2.5 trillion globally. The cost is projected to escalate to $6 trillion by 2030. The toll in human suffering, both for the patients and their caregivers and families is incalculable. The main reason for this debilitating toll is the lack of effective treatments, which stems, in part, from sheer ignorance on how the brain functions in health and how it malfunctions in disease and disorders.</p> <p>Recognizing this gathering storm of brain disorders and the gap that exists in the mechanistic understanding of the brain, governments across the globe have taken action by organizing and investing in brain research efforts. In the U.S., President Obama launched the BRAIN Initiative (Brain Research through Advancing Innovative Neurotechnologies) in 2013 to revolutionize our understanding of “the brain in action” and to better treat brain disorders across the spectrum from Autism to Alzheimer’s to PTSD. When the President issued his “<a data-cke-saved-href=" https:="" ostp="" www.whitehouse.gov="">All Hands on Deck” call to action for the BRAIN Initiative, we at Inscopix asked ourselves, “how can we -- a young neuroscience startup with a team of only 14 at the time -- make an authentic and impactful contribution to such an ambitious project?”

That is how the DECODE Grant Program was born, and that is how Inscopix was recognized by the White House as a private sector partner of the BRAIN Initiative. DECODE, Deciphering the Circuit-Basis of Disease, at its core is a scientific, and philanthropic, endeavor by Inscopix to crowdsource the discovery of neural circuit-based biomarkers of brain disease by awarding technology and training grants to ambitious brain disease research projects.

Central to the efforts of the DECODE awardees, and to the efforts of many others pursuing a more sophisticated understanding of brain disease, is the realization that revolutionizing our understanding of the brain and brain disease will require a fundamental understanding of how brain circuits work. Successfully decoding the brain, one circuit at a time, will also require an ecosystem, including small and large companies enabling neural circuit research with new tools, analytics, platforms and solutions. A remarkable opportunity exists to help spawn this ecosystem, to catalyze brain research, and Inscopix is ready to lead the way.

The DECODE Summit provided a unique opportunity to highlight the work of DECODE awardees, to highlight the value of neural circuit approaches to understanding the brain and brain disease, and to highlight the need for multiple stakeholders to work together to not only catalyze neural circuit research but to also help translate new scientific discoveries into potentially transformative therapeutics. From Cori Bargmann’s eloquent description of what a “circuit” means and why understanding circuits is important, to Tom Insel’s inspiring capstone speech summarizing the day and outlining the promise that lies ahead for better treating and perhaps eventually curing mental illness and brain disease, the DECODE Summit charted an arc spanning from innovative technology, to basic neural circuit research to advance a mechanistic understanding of the brain, to the promise of a new generation of pharmacological and device-based therapeutics reducing the economic and social toll of mental illness and brain disease.

Be on the lookout for the release of videos from the DECODE Summit in the coming weeks. For details about the Summit, go here.